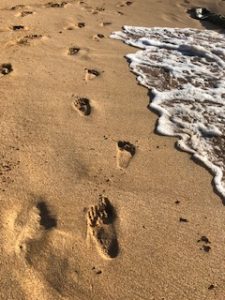 Sitting in a bagel shop in the upper east side of Manhattan enjoying my bagel and coffee I noticed a homeless man at an adjacent table asking people for money. A well-dressed woman reached into her pocket and handed him a quarter. A quarter! As he stared at the coin in his palm something got ignited inside me. I went over to him and said, “Come here. Stand in line and order anything that you want and I will pay for it.”

“Really? You will pay for it?” he asked. “Can I have a roast beef sandwich? And cheese, too. Is it too much to add Swiss cheese?”

“Well, can I have a pickle, too?” He paced back and forth and as he saw more food behind the glass display he changed his order. “No I want cole slaw, oh, no, I want egg salad and, oh, tuna fish and a pickle.”

I was struggling to understand what he wanted. “All on the same sandwich?” I asked.

“Yes, all on the sandwich!”

I wanted him to have the dignity of standing in line and ordering for himself but it became clear that he was not capable of that. He couldn’t make a decision with so many choices in front of him. He was overwhelmed and also concerned that his hands were dirty. When he went into the restroom to wash his hands I ordered the sandwich with sides of everything that he wanted. When he came out I handed him the bag and he said that he was going to stay at the table and eat there.

Mother Theresa said, “If you can’t feed a hundred people, then feed just one.”

Twenty-eight dollars fed him and in a sense it fed me, too.