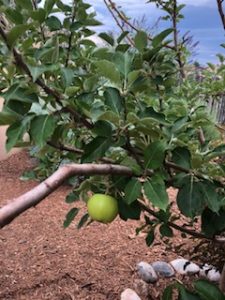 Are you unsatisfied with your social and work interactions? Sometimes they can leave us feeling less than successful. We have many choices of how to react that can make our experiences with others much more comfortable, even fulfilling. It just takes some thought rather than giving in to a knee-jerk reaction that sets up a power struggle.  It demonstrates how you treat others, which is really a reflection of how you think of yourself.  Each interaction is a chance to change the world.

Here’s a multiple choice situation. Imagine that you hired two workers to fix your irrigation system. While they were working, they ate all of the apples from your tree. It had taken two years to produce a crop and the tree yielded only four apples which you were watching grow everyday, and they ate all of them. You discovered it after they left and you noticed that the cores were in your garbage can. In dealing with the main worker, did you:

A. Call him up and start yelling, “How could you have the nerve to eat all of the apples? It was disrespectful and intrusive! I trusted you and now I don’t want you to do anymore work for me!”

B. Talk with him the next time you saw him. “Did you eat the apples from the tree? They were special to me. I have waited two years to see a crop and I was planning on making applesauce and sending it to my grandchildren.” Listen to his answer. Come to an understanding together where you each hear the other.

C. Don’t say anything because it was not so important compared to other things that are happening in the world. It doesn’t really matter. You will get more apples next year.

I think that I am pretty transparent on this one. Although my first inclination would be A, I hope that my anger would self-destruct before I got a chance to speak with him. And C would bring no satisfaction because I really did care about the apples. I had a special plan for them. Ignoring my feelings would leave them simmering endlessly popping up when I wasn’t paying enough attention to stifle how I really felt.  Pretending to be above petty feelings takes more energy than admitting our humanity, and it doesn’t ring true.  The best choice for me is B. Those statements respected and acknowledged both of us and opened an opportunity for an exchange without diminishing either one of us.

How about you? Which would you do, and which do you hope that you would do?