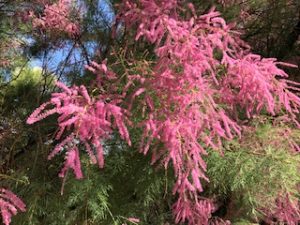 Last week I had two experiences from opposite ends of my universe. First was a workshop on sexuality…not just sex as we know it but our erotic relationship with life. The teacher described it as “the discovery of the absolute truth of a person, the will to emerge as the person who we were born to be, the human liberation of experiencing oneself as one’s soul intended one to be.” Just imagine three days ten hours a day doing qigong forms to move energy and exploring ideas that delve into the very essence of our destinies. By the last day I felt broken open with new ideas swirling around where decades of assumptions were rattled from their perches. With both genders in the class, I began to understand the male experience and its vulnerabilities as I never had before. No assumption was left unveiled.

The class ended at 10:00 p.m. on Sunday night and Monday morning I greeted five of my high school friends for a three-day mini reunion. I hadn’t seen one of them since I was eighteen…and that was a long time ago! With the warm emotions of greeting old friends and the conversation veering from high school trivia to catching up on siblings who we knew well I felt like I was straddling two worlds. I imagine that we all felt that way but I had just come from a particularly jarring exploration.

I wondered which of those worlds is the real me. Which one holds the title of my being? Which is the blueprint and road map to me? The answer is clear: both and neither. I am a work in progress – a conglomeration of past experiences and present choices. Everyone is. It is healthy to be able to embrace both and find a place where discovery meets the past and friendship warms exploration. Rich experiences expand us. It’s all in how you see it.