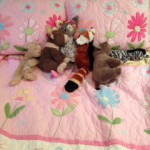 My three-year-old granddaughter asked me what was my favorite color on her new quilt.  I pointed to the petals of a flower and said, “This one.  It is called hot pink.”  A few minutes later she said, “Ouch! My elbow hurts!”  When I asked what happened, she said that she burned her elbow on the hot pink.  She couldn’t differentiate between a hot burner on a stove and the hot pink on her blanket.  She believed that both could burn her.  Studies show that thinking of an experience and believing it can elicit the same physical feeling as actually experiencing it.

In an article on quantum physics, John Assaraf sifts everything down from our tissues and organs to cells, molecules, atoms, sub-atomic particles, and finally, to energy.  He says that we are pure energy that is constantly changing beneath the surface and is controlled by our minds.  “Your life becomes what you have imagined and believed in most.  As Nobel Prize winning physicists have proven, the physical world is one large sea of energy that flashes into and out of being in milliseconds, over and over again.  Your thoughts literally shift the universe on a particle-by-particle basis to create your physical life.  An object does not exist independently of its observer.”

It seems that we get infinite chances to recreate our experienced world.  Every morning when you wake up you get to start over.  Don’t like how it’s been going?  Imagine it differently, and maybe your thoughts will catch the universe between a collapse and a coming into being again.

3 Responses to “Beware of Hot Pink!”