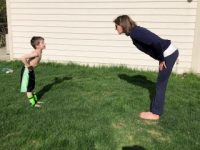 When I mention that I recently got certified to teach qigong, most people stare at me blankly.  They are too shy to ask what it is. When I ask them if they know what it is, most confess that they have never heard of it. That’s when I say that it is like taiji (tai chi), and then they nod with a look of relieved recognition.

There are several explanations on how they differ but here is the one that I like best. It goes back to their origins. Taiji developed in ancient China when the ruling dynasty didn’t allow the villagers to learn martial arts because having the skill of a martial art would make them too powerful and threaten the rulers. The villagers practiced slowing down the movements to such a degree that they became indistinguishable and, since the rulers didn’t recognize what they were doing, they were allowed to practice. Qigong, on the other hand, started as a healing modality practiced by entire villages to heal their communities and later individuals. While taiji is better known in the west, qigong is a part of the fabric of modern Chinese society, practiced in parks, schools and hospitals. Taiji is originally and fundamentally a martial art; qigong cultivates, circulates and harmonizes chi. Similar slow movements, but different origins and focus, both contributing greatly to enhance our life experience and healing.

That’s just the beginning. There’s so much more!  Since I have studied qigong I’ll talk about that. The forms developed by the founder of MogaDao Institute tap into the psychological and spiritual aspects of life enlisting imagination as our inalienable right. I’ll explain this and the health benefits in upcoming posts. In this time of an insidious low level of anxiety permeating all of our lives we need to find new ways to cope and to thrive. Distance from our original essence and ensuing systemic trauma have been accepted as unfortunate and inevitable facts of life, but they are not. The real fact is that we can and need to get closer to who we truly are and share that with others.  If you would like to learn more about qigong feel free to visit the Qigong page of this website.  Otherwise, hang in there and in the coming weeks I will explain the ways that qigong can ease the journey into the self that has been waiting for you to come home.