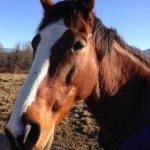 The saga continues, but now it’s 1300 miles away on a horse farm in Ashland, Oregon.  A few days ago, my daughter, who newly settled in Ashland in an apartment with only a blow-up mattress and a few blankets, suggested that I go there to check it out before settling in Santa Fe.  Being such a huge decision, I should rule out the only other place I was considering and, in the process, help her set up her apartment before she started a new job.

I cancelled everything and found myself on a series of planes heading toward Oregon.  They were small planes and the gates were close to each other.   So, when I boarded the last one in Salt Lake City and found someone else in my seat, I was lucky that she noticed that I was on the wrong plane.  Do you think that the computer scan would pick up the wrong flight number on my boarding pass?  Nope!  Running to another gate and jumping on the plane (this is sounding familiar) at the last minute, we squished my suitcase into a compartment before the door was closed and the plane skimmed the snow covered mountains of Utah.

When I arrived in Ashland, my daughter was excited to show me the horse farm where she had been staying and introduce me to her first friend, a chocolate brown mare named Lulu.  It is said that horses can heal.  They are known to communicate with people and to calm down the most neurotic states of mind.  Lulu was the gentlest, most peaceful animal I have ever seen.  As my daughter stroked her neck, Lulu’s eyes drifted closed and she was lulled into a silent and mesmerized state.  Being in Lulu’s presence was magical.

Between trips to Office Depot and Best Buy, I tried to get a feel for the town.  Ashland is known as an eight-mile oasis of radical and liberal new age thinking amidst a very conservative state.  It feels to me that while the people accept fashions ranging from a sparkly pink, fluffy coat while shopping at the market, to a man dressed up like a flag with matching hat while in line at Best Buy, to a woman bathing naked in the hot springs wearing only a Rastafarian wig, I miss feeling a special warmth, friendliness and awareness of other people.   It is shocking to me since I have been reveling in just the opposite in Santa Fe.   It’s my first impression, and it could be much different, but I am missing an open and welcoming spirit.

We’re off to a hike in Mt. Shasta tomorrow, and back to Santa Fe the next day.  I am ready to get away from fluorescent store lights, highways and sitting on the floor with a screw driver in one hand and instructions for furniture assembly in the other.

5 Responses to “The Saga Continues”