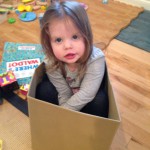 My son and daughter-in-law have a system.  When their almost-three-year-old daughter misbehaves, instead of reprimanding her as a person, they say that she made a bad choice.  She has to go to Time Out against the wall and count to ten.  When she comes back into the family social place, she has to say what her choice was that landed her in Time Out, what would have been a better choice, and apologize to the recipient of her behavior (usually her little brother).

I think that this method of molding behavior is brilliant.  She is made responsible for her actions which are different from herself.  She is always lovable, even when she makes bad choices.  They never humiliate or scream, but they always hold her accountable for her actions.  It is a delicate balance that is consistent and binding.  One time I saw her tell her parents that she was going to Time Out because she made a bad choice.  Ten seconds later, she returned and the issue was over.  Self-regulation with no agenda attached.  Accountability while being worthy.  She has learned that it’s okay to be vulnerable and human, and that her inner core is never at stake.  I tell them that she is one of the few people I know who won’t need a therapist when she gets older!

While they are teaching their children, I observe and learn, too.  Hopefully, our children have learned from us and are producing a generation that goes further in being conscious of their actions and of others’ feelings.  Compassion, kindness and honesty never go out of style.

6 Responses to “No Need for Therapist”