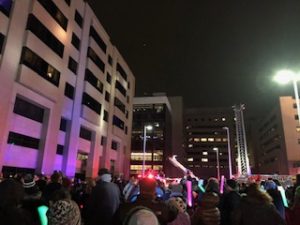 It was Christmas eve in Michigan and I was visiting my son and his family. They told me that there was something special that they wanted us all to do on that night…something that happens every night in December in that town. We got bundled up (the kids in woolen hats and snow pants) and headed out to the local hospital as we braced for the frigid evening air and our mission.

At 7:45 we parked in the lot and followed the stream of people onto the plaza outside of the hospital. At the stroke of 8:00 pm, we all turned on our flashlights and shined them into the windows of the hospital delighting in the responding lights coming from the hospital corridors and rooms.  They call it “Moon Beams for Sweet Dreams”.  We were sending a message – telling the patients that they were not alone, that we were there in solitary with them as they faced difficult, painful and scary challenges. I was not the only one who was moved to tears. It was an uncontrollable response to the deep satisfaction of giving to others.  Somewhat anonymous but connected.  In the Jewish religion it is called a mitzvah.  A Christian might call it doing unto others as you would have them do unto you.  I believe that all religions have a term for it since kindness and caring for others surpasses religious dogma. It was such a simple act, but it seemed to touch us all – soul to soul.

4 Responses to “How Do You Tap Into Your Soul?”