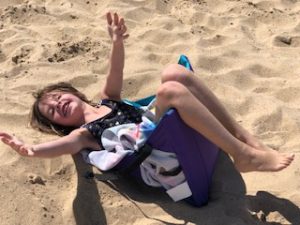 It takes courage to apologize. It is much easier to ignore your mistake and hope that both parties will forget it. Maybe that happens to some people…not in my world. An unexpressed apology gnaws at my gut like a huge bowl of ice cream that makes me feel tired and sick the next day. When my transgression is huge I sometimes find that one apology doesn’t cover it.

A few years ago when I attended the first class at my new qigong (like tai chi) school I was excited to find a practice that I could call my own. I was hopeful and enthusiastic to see what this tradition was about. But halfway through the class I started to get angry. The teacher was constantly talking. I had taken qigong lessons before and the teacher did the practice in silence. We were entrusted with the job of watching him and mimicking his movements. But this time she talked about how we should move and what each movement corresponded to in spiritual terms. I was fuming that there wasn’t a peaceful quiet to surround the movements.

After class, in an angry tirade, I lashed out at the teacher. I told her that her constant talking was annoying and distracting. How was I supposed to do the form? If I was listening and thinking then I wasn’t feeling. I couldn’t do both at the same time. In such a sacred tradition wasn’t going inward and feeling the energy more important?

The problem wasn’t what I said, it was how I said it. I unleashed my criticism in fury and accusation indulging my need to explode without regard for her feelings. I left little space for her to comment and had even less appreciation for how she must have felt. I didn’t know that she was a new teacher and was feeling unsure how to lead her students in what she had just learned.

The next week I apologized. I acknowledged that I shouldn’t have talked to her that way and I was sorry for it. I told her that I rarely talk to people with anger and I deeply regretted treating her like that. She graciously accepted my apology.

You might think that it was over. But for the next two years there was a cautious distance between us. I tried to ignore it thinking that it would dissipate in time but her discomfort around me was palpable and my guilt was woven into each glance. Then last week when I attended her class one of the other students commented on how, even though it was part of the learning process for the teacher to explain the movements, she enjoyed that this teacher didn’t speak much during the class. The teacher took my hands and before she could say anything I stomped my foot and said that I hated how I talked to her that first day. She shook her head and said that she learned from my comments. Because of what I said she consciously spoke less in her teaching and she felt that everyone benefited from that. I told her that I had thought about what happened and realized the genesis of my tirade. Where I used to live I often felt wary of expressing myself and knew few people who were interested in listening. When I moved to New Mexico I found that many people listened and I let my thoughts and emotions flow like a faucet that was rusted open. I engaged in others’ conversations and felt entitled to give my opinion even when not asked for. It took awhile for me to learn how to modulate and moderate my voice. And, again, I truly regretted hurting her.

It took two apologies to fully heal. The air is now clear and we were both grateful for the opportunity to be honest and vulnerable with each other one more time.

One Response to “Hoping You’ll Forget”