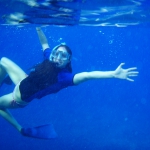 Forgiveness is getting a lot of attention lately. Every spiritual teacher knows that it is at the core of our ability to move forward and live a more authentic life. To forgive is not to condone what someone did. It is the act of releasing its hold on us. There is a powerful shift toward freedom when we open up and let go of feeling wronged. It is rewriting the script. It is choosing light. It is choosing self-love. It is stepping out of an automatic perceived disrespect. It is stepping into a conscious remembrance of self-worth. Forgiveness heals and liberates.

One of my favorite Taoist tales goes like this: Two monks were walking along a river. They came across a woman who needed help to get to the other side. One monk picked her up and carried her across and then put her down. The monks walked awhile longer in silence. When he couldn’t contain himself any longer, the first monk said, “Brother, how could you carry that woman across the river? It is prohibited to touch a woman!” The other monk replied, “But, Brother, I put her down on the other side. You are still carrying her.”

I believe that there is something more to the act of forgiving. I think that our bodies are not biologically wired to hold onto grudges. Being 60+% water makes us flowing beings. Our cells are continually regenerating and replacing old cells. Our energy auras change with thoughts and emotions, as is perceived by Kirlian photography. Grievances do not change. They require enormous amounts of energy to keep in place as we physically change. They just don’t go with who we have become.