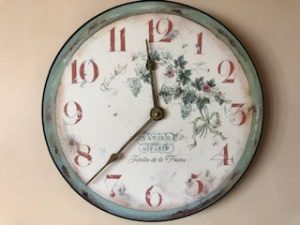 Some scientists say that time does not exist. In the mid-60’s, two American theorists, Wheeler and DeWitt, produced a complex equation attempting to explain how the Universe works. Shockingly they found that time did not need to be factored into this equation. British physicist Dr. Barbour concluded that time does not exist. He argued that the Universe is really a vast expression of ‘nows’, like frames on some cosmic movie-reel. Another way of describing it is to say that time is not linear, but exists on planes and we can move back and forth between them.

I began wondering about the properties of time after turning the clocks forward last week. How arbitrary could it be if in a second we could say that an hour passed, just by changing the hands on our clocks? And in the fall we arbitrarily say that an hour did not exist? As if we can control time. It seems like it is a convenient way to make sense of our lives, but not necessarily an accurate one.

If we peel away our flawed concept of time, what is left? What truly exists? From my very cursory research and experience, I believe that we live in a vibrational Universe. Pulses travel the vast network that connects us in a way that we cannot see, but can feel. We are not taught to tune into those feelings, but instead depend on constructs that lean on pillars of non-truths such as the existence of linear of time. I ask myself what is left when all that is not true is stripped away. The answer seems to be the vibrations of love and appreciation. They are huger, and maybe smaller, than definitions. Don’t try to explain them. I can’t explain how electricity works, but I know that it’s real.  Just feel them. That’s all we need to know.

2 Responses to “Does Time Exist?”